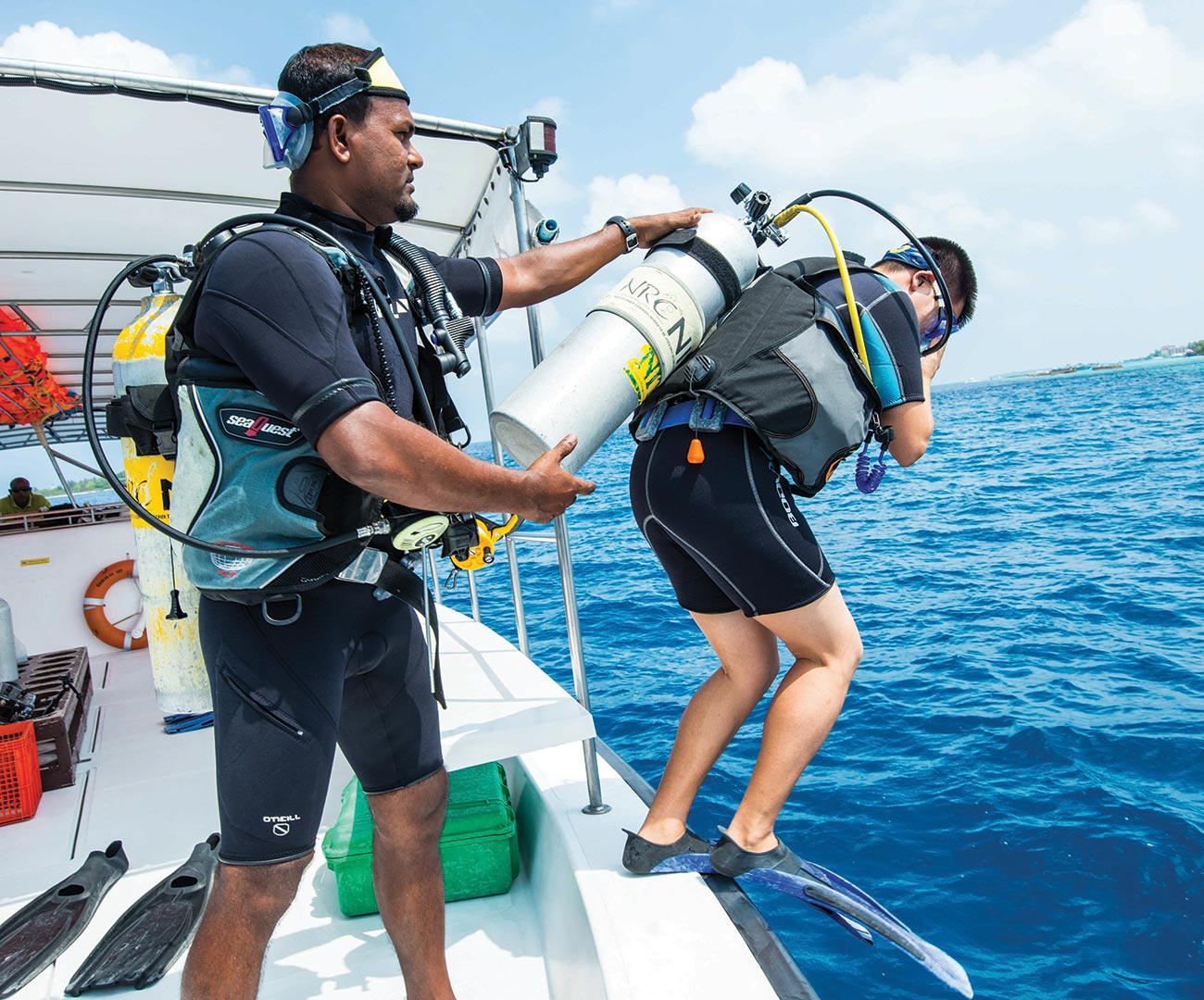 Sneak a peek at his official ID, and you might read Mohamed Ibrahim, but the Assistant Manager at the Euro Divers installation at the watersports centre is known to all as Momo.

Born 36 years ago on Hoarafushi, the northernmost island of the Maldives, Momo had to make his own way early in life, cutting short his schooling to take care of his invalid elder brother. “On my island, there are almost no jobs, and you had to make a living on your own, either fishing or farming. Many people left Hoarafushi to find work in the resorts, and I always dreamed of doing the same.”

But Momo wasn’t the same as everybody else who left; there is simply no better tour guide for the Maldives. We followed the enthusiastic islander on an adventure through his two favourite places – the depths of the ocean and the streets of the capital city, Malé – as he shared diving insights and insider city spots.

Momo lives in Malé with his wife and two children, 11-year-old son Maan and six-yearold daughter Malak. So when his feet are on dry land, you’re most likely to find him entertaining the brood, playing and relaxing in the city’s special spaces. “Malé is quite crowded, and we don’t have much green space, so my favourite places to go are parks where we can relax outside. The Raalhugandu Kids Park has a small zoo with ducks and birds and even a salt-water crocodile, and there are lots of rides for kids to play on. The Sultan Park in the centre is the only place in town where you can sit and relax on the grass in the shade of big trees, which are quite rare in the Maldives.”

It’s the wonderful, natural atmosphere of Malé that has kept Momo grounded in the islands. Another place to get a taste of the country’s sweetness is the local market on the north side of the island – a regular haunt for the aficionado of fresh fruit, and a place not often on a tourist’s itinerary. The abundance of fruit and vegetables grown on the local islands paints the market in an array of bright colours, as the sweet scents of ripe bananas fills the air.

But a diving is tough work, and one can’t survive on produce alone. Momo’s got a quick cure for a caloriedepleted body: the dozen or so Maldivian fast food shops around Southwest Harbour Point. Called Sai Hotaas, these are the joints where the locals drink coffee and tea and munch on spicy snacks and delicious sweet pastries. The service is quick, and the atmosphere is very friendly – the perfect place to meet and eat with the locals.

For a fancier meal, Momo hits the beach. “In the afternoons, I sometimes go to the Breakwater Restaurant that is located next to Malé’s only beach. It’s open air, and there’s always a nice breeze coming off the sea. They serve fresh fruit juices, salads and sandwiches. Although the beach is artificial, it’s a nice safe place for children to swim. They can even learn to surf there!”

Further along from the beach is the Tsunami Memorial, next to a popular surf break called Raalhugandu. This is Momo’s favourite place for an evening stroll – a walk along the causeway is backdropped by the meditative vista of the water, where boogie boarders and surfers catch waves under the aircraft landing and taking off at Malé International Airport. It’s a view that inspires guests to take a dive into the beautiful clear waters.

The spectacular coral reefs and abundant marine life in the Maldives are legendary the world over, and no visitor should leave the islands without seeing the natural spectacle up close for themselves. Even beginners can join the dazzling action, as Kurumba is fortunate to have one of the most experienced Master Scuba Instructors in the Maldives working at the resort.

Arriving in Malé at the age of 16, Momo soon realised that without knowledge of the English language his chance of finding work in a resort were slim. By enrolling in night school he obtained a grasp of the basics and managed to land his first job at Kurumba, working in the laundry. On one of his days off, he gota chance to go along on a dive boat, and he was instantly fascinated by the idea of going underwater. When a position opened up, he transferred to a job on the dive dhoni and dived for the first time when he and the crew used scuba gear while cleaning algae off the hull of the boat.

The first time I dived, I realised that this is what I wanted to do for the rest of my life. It felt so different to anything I had experienced before. It was really a ‘wow’ experience! The underwater world was so beautiful; I was hooked from the beginning.”

Inspired by the adventure, Momo started scuba diving training and worked his way up to the highest scuba certification of Master Instructor. Now with thousands of hours underwater, Momo is a pro at getting the most out of a dive in the Maldives. But before he can show you where to find a shy eagle ray, he has to teach newbies how to stay safe, keep calm and never panic. He especially loves teaching underwater rescue courses. “There is a lot of responsibility with my job, and sometimes I have to tell people that they cannot dive in open water if during the checkout dive they show they don’t have enough confidence or the necessary skills.

During the dive, my job is to look after the divers and ensure their safety. I can also help show people underwater life that is sometimes not so obvious, because many fish use clever camouflage to hide from predators. I’ve visited these sites many times, so I know where to look for things like turtles and nurse sharks, as well as the smaller, harder to spot species.”

Most divers just want to see big pelagic fish like manta rays and sharks, but it’s the more unusual creatures that continue to wow Momo—colourful nudibranchs and frogfish. If you want to see both, Momo might take you to HP Reef, which he says is good for giants as well as small interesting animals. One of his favourite dive sites near Kurumba is Nassimo Thila, which is famous for its profusion of multi-coloured soft corals. And for beginner divers and snorkellers, Momo likes the Kurumba house reef, where visitors will be amazed by the sheer variety of marine life the Maldives has to offer.

However, it’s not always that easy. “About 40 minutes away by boat is a site called Emboodhoo Express that is amazing for all kinds of sharks, large schools of manta rays as well as big tuna and barracuda. But it’s only for super experienced divers due to the very strong current.

”It’s a deep depth of experience and warm heart that makes for a great guide, one who makes your safety and fun his top priorities. Whether you meet him over a cup of coffee on the shores of Malé, or dive with him in search of rare underwater wonders, it doesn’t get any greater than Momo. 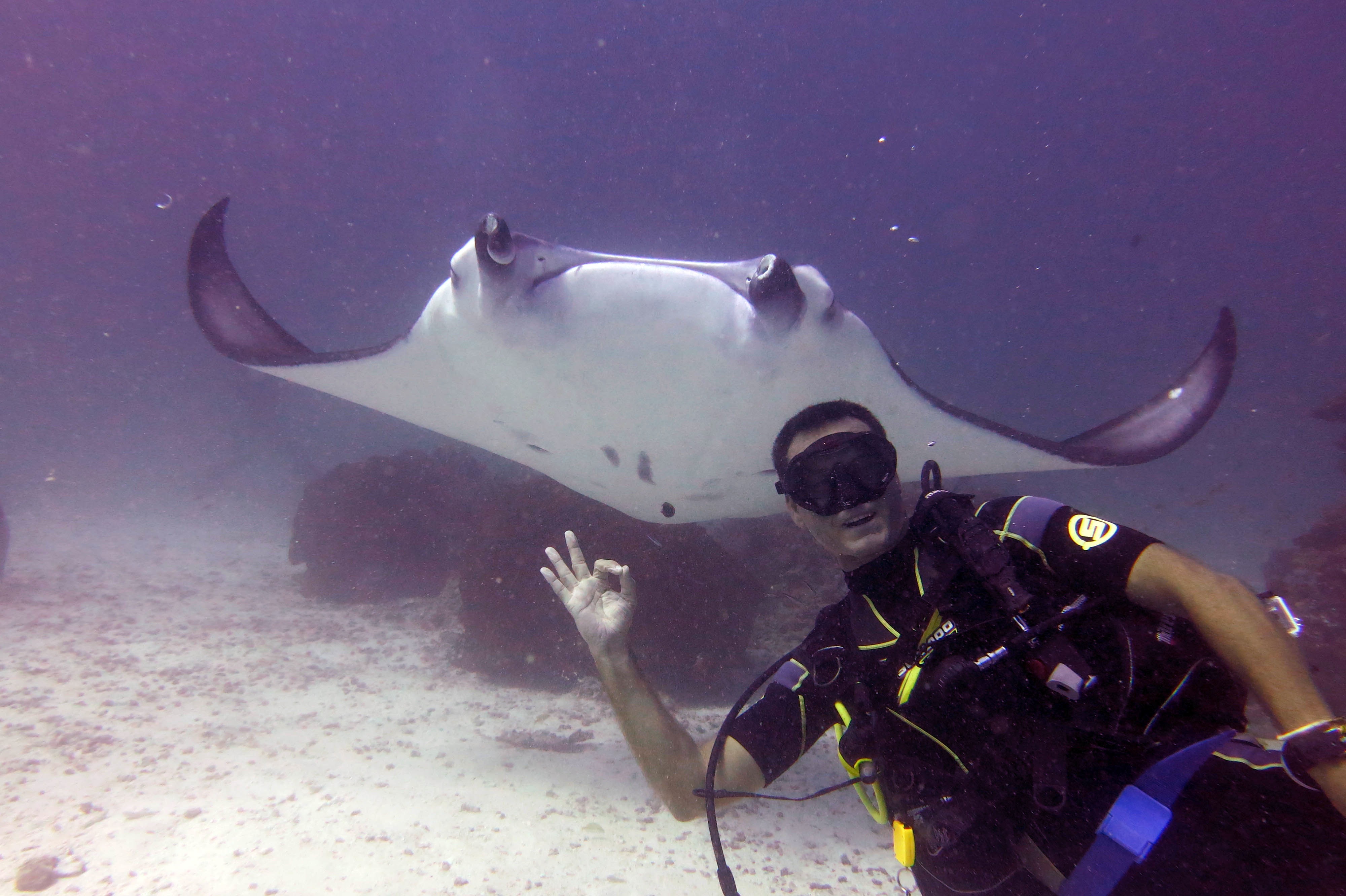 Should I try diving Activities
`

Escape into an exciting adventure, right here at Kurumba Maldives.

Plan an amazing escape ahead to receive exclusive savings.